Dumbbell plot for comparison is the correct usage, and it is described much better than I ever could by Connor Rothschild on his blog. In his post, he comprehensively demonstrates using the R package ggalt and how to make and interpret multiple different types of dumbbell plots.

What I want to add here is a use-case that I am promoting in a chapter I’m writing with Natasha Dukach, my forever intern, on dashboards. It’s how to use a dumbbell plot for comparison of rated items. I’ll give an example using the RateMyProfessors.com web site – but I’m going to use it for college ratings, not professor ratings (which can get pretty mean).

Want to learn how to make visualizations with open source software?

This LinkedIn Learning course will teach you the basics.

A lot of times, web sites that rate items (hotels, colleges, tech) will provide an overall rating, and then ratings on certain characteristics. As an example, a hotel web site might have users rank hotels on several dimensions, such as location, cleanliness, and price.

RateMyProfessor.com uses this approach for ranking their colleges. I decided to make a dumbbell plot for comparison of my alma mater – the University of Minnesota, Twin Cities – and the most popular college in my new home in Massachusetts, which is Harvard University. I took a screen shot of the ratings on September 20, 2021, and put them on a slide for you. 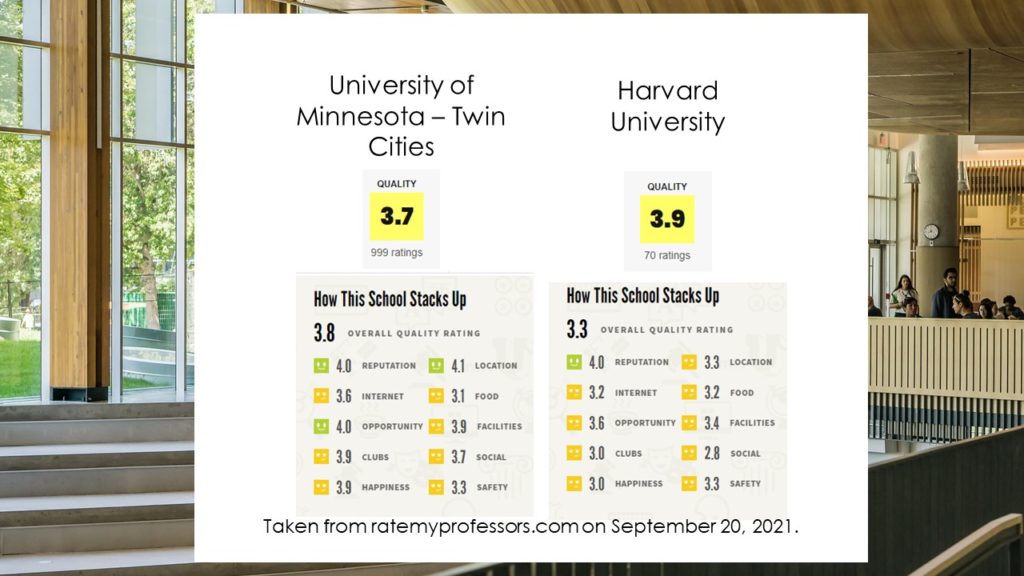 You will see that it provided two quality ratings that were different – one on the landing page, and one above the other ratings labeled “overall quality”. I did not dig into any documentation to find out why, but I noticed they were close to one another. Also, I was surprised to see that the ratings on many of the characteristics, such as location, food, and safety, were very similar.

It was hard to grasp so many different comparisons at once numerically, so I made the dumbbell plot for comparison below using the ggalt package in R. 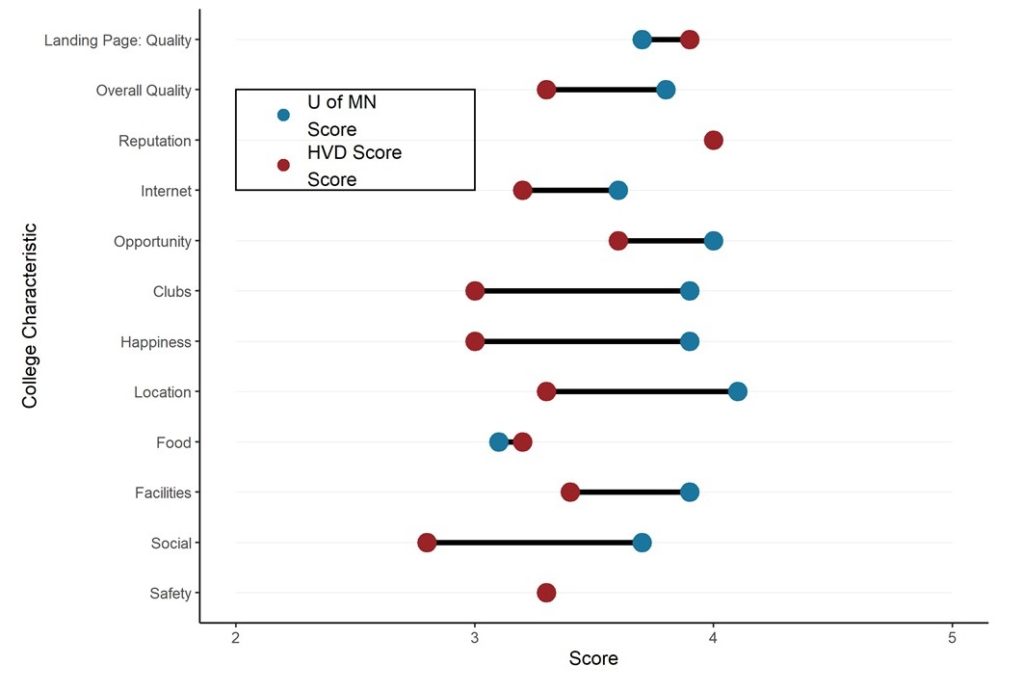 Since both the U of MN and Harvard use a dark red color (technically not the same color – “maroon” vs. “crimson”, respectively), I thought I’d use red for Harvard only, and a blue color to represent cold Minnesota for the U of MN. The plot makes it easy to see that Harvard is only better than the U of MN on two things – the quality score on the landing page, and food. To everyone who sees this, please understand – the food off-campus in Minneapolis is much better than in anywhere in Boston. I mean Indian food and vegetarian/organic food – and also, make sure you order the mock duck – from anywhere that serves it!

The dumbbell plot also makes it totally obvious that in terms of reputation and safety, at least on RateMyProfessors.com, Harvard and the U of MN are the same. I think I’d agree with the safety score – but reputation? If this is true, you are wasting your money going to Harvard!

The plot also easily shows that the U of MN is far better on many of the points. However, this is a bit biased – I did not anchor x at zero, which is the beginning of the rating scale. I wanted the magnify the differences – but this can lead to a biased interpretation, that the differences are bigger than they are.

In the end – what is important to you when choosing a college? If you don’t care about the food and you do care about the happiness, then maybe the U of MN is for you. And who knows how good these ratings are from RateMyProfessors.com? Wouldn’t a web site with that topic attract disgruntled students? That could be another source of bias

Learn how to apply a study design and get results!

How to Make a Dumbbell Plot for Comparison of Rated Items

You can get this code on GitHub, but I’ll show it here and explain it. As is always true, we need to start by making a data frame designed to be plotted in the ggalt package.

Finishing Touches to the Data

We have a few more things to do before we plot. First, we need to convert Order and the score variables to a numeric format. We also have to pick colors for the dots representing the U of MN and Harvard, and load our packages.

Here is the code to build the plot:

Then comes the kludgy legend:

dreaming of a career in data warehousing?

Read this book to get started.

Want to compare multiple rankings on two competing items – like hotels, restaurants, or colleges? I show you an example of using a dumbbell plot for comparison in R with the ggalt package for this exact use-case!