With all this talk about “flattening the curve” of the coronavirus, I thought I would get into the weeds about what curve we are talking about when we say that. We are talking about what’s called an epidemiologic curve, or epicurve for short. And to demonstrate what an epicurve is and what it means, I used the R package EpiCurve to demonstrate making an epidemiologic curve so you can see how it works.

Source Data for my Epicurve

I actually back-engineered the data for my dataset based on viewing the epicurve in this article from Morbidity and Mortality Weekly Report of a nosocomial outbreak of Middle East respiratory syndrome (MERS) at King Abdulaziz Medical City in Riyadh, Saudi Arabia in June through August, 2015.

The downside to back-engineering data is that it might have errors, but the advantage is that I can assemble it into the perfect structure for the R package EpiCurve. If you look in the article, they have an epicurve, but they don’t include the raw numbers, so I just guessed the data. The data I guessed are below.

Variables for the R Package EpiCurve

Programming for the R EpiCurve Package

First, I knew I’d need two colors – one for HCW and one for non-HCW so I used the Coolors app and the logo for the Saudi Arabia Ministry of Health to pick my colors in hexadecimal. Once I selected them, I loaded them into variables, one called saudi_gold and one called saudi_green.

That way, I could just refer to them as saudi_gold and saudi_green when programming.

Next, after installing the EpiCurve package, I called up the library, and made these specifications to get the epicurve shown at the top the post.

Here are some important parts of the code above:

Where the Epicurve Starts Flattening 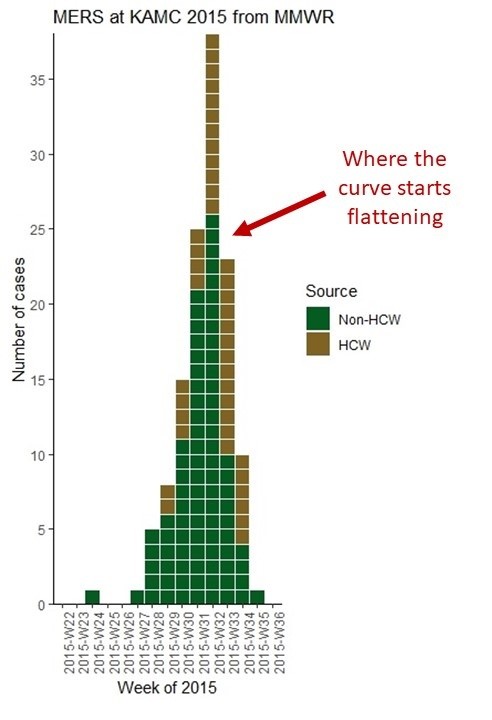 The reason we make an epicurve during an epidemic is that in addition to tracking the mortality rate, we are interested in tracking when the curve actually begins to flatten. Note where I annotated the epicurve from the MERS article to point out the week that that curve finally flattened. When the curve finally flattens, you are literally “on the other side” of the outbreak. The problem is that during the epidemic you never really know you are there until you get there, and the day or week you are in finally sees fewer new cases than the day or week before.

As you proceed through the epidemic, as long as you keep formatting your data the way I demonstrated, you can keep adding to it and generating a new epicurve every day.

At the beginning of the pandemic, I used the EpiCurve package in R to make an early epicurve. I show you my code in this blog post.