As I write this, the trial of Minneapolis Police Officer Derek Chauvin in the killing of George Floyd is underway. So far, it has been established that Officer Chauvin kneeled on Mr. Floyd’s neck for over nine minutes, cutting off his breathing, and police leadership has testified that doing an act like that is deadly. Yet, there is still the burden of proof that the State of Minnesota will have to show. They need to show that the knee of Officer Chauvin on Mr. Floyd’s neck was a “substantial cause” of Mr. Floyd’s death “beyond a reasonable doubt”. This provides an opportunity to demonstrate the causal pie model we use in epidemiology.

Let’s Use a Causal Pie Model

Before we go too far, let me show you a demonstration of Kenneth Rothman’s “causal pie” concept, which you can read about more on this web page from the US Centers for Disease Control and Prevention. We epidemiologists are often taught to use this model to think about what “caused” a heart attack in a person.

Let’s imagine Mr. Floyd had died of a heart attack instead of under the knee of a Minneapolis police officer. In that case, we could figure out what “caused” Mr. Floyd’s heart attack using the causal pie model. So far in the testimony, we have found out Mr. Floyd had some co-morbidities that could lead to a heart attack, such as heart disease and drug use. We also learned he was purchasing cigarettes before he was killed, so let’s assume he smoked tobacco. 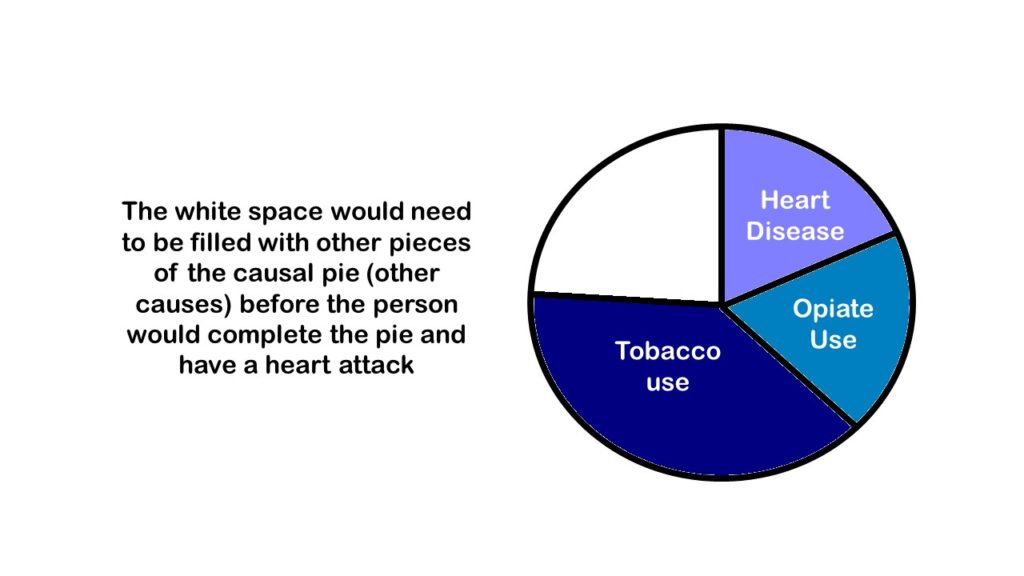 As we can see in the diagram, for Mr. Floyd to have a heart attack, he would have needed to fill in the white space of the pie with other causes. Other testimony showed that Mr. Floyd was a very active person – football, walking around the lake, lifting weights. That probably played a big part in keeping him healthy even with the other co-morbidities. In fact, that’s probably why he did not have a heart attack prior to the day of his encounter with Officer Chauvin – he had “prevented” the white piece of the causal pie.

Characterizing Relative Cause with a Causal Pie Model

Rothman’s pie demonstrates what we all know – heart attacks are not caused by one thing, but instead, by a group of things working together. Actually, all deaths are multi-causal, depending upon how you look at it. Someone dying of COVID-19 is not really dying of having the virus, but is dying of respiratory failure or a blood clot that was caused by having the virus. Since not everyone with COVID-19 dies or even gets symptoms, genetics are a part of the cause of a death from COVID-19. This means that nothing is straightforward in the Causal Pie Bakery. 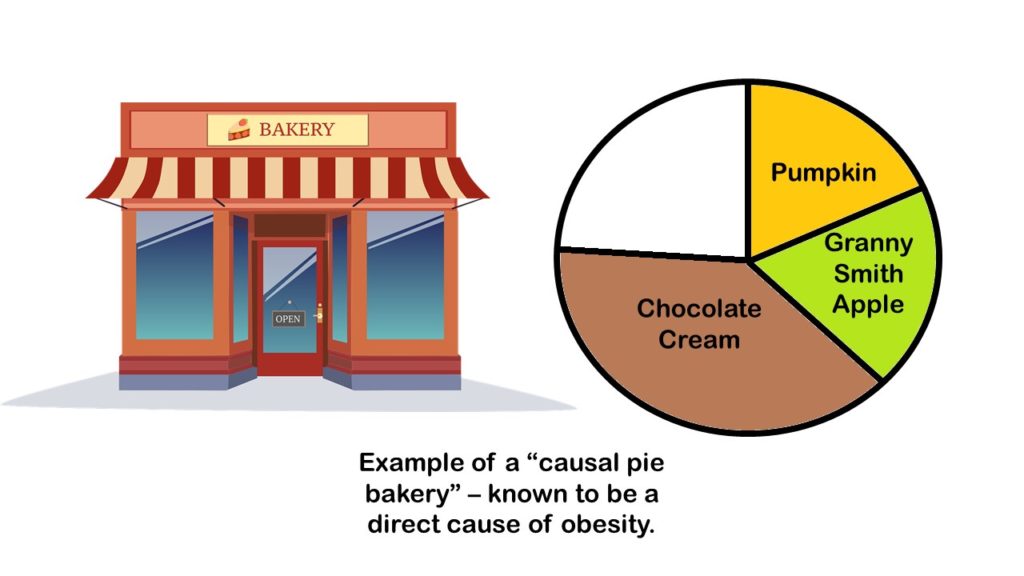 Even in the midst of this confusion and vagueness, we can use terms to try to characterize relative cause. In Minnesota law, this translates to the fact that the prosecution will need to demonstrate that Officer Chauvin’s knee on Mr. Floyd’s neck was a “substantial” cause of his death, and this is the case “beyond a reasonable doubt”. So of course, Officer Chauvin’s defense will try to argue that kneeling on Mr. Floyd’s neck was not a substantial cause of death, and that opiate overdose was. The reason they mention opiates is because they were found in Mr. Floyd’s system after he died.

In that way, opiate overdose deaths usually are caused literally by respiratory depression – meaning the person’s lungs become so heavy they just stop inflating and deflating. In many cases, this results in a non-fatal overdose, in that their breathing just becomes very slow and still for a long time, and eventually, they wake up and they come out of it. But if they have pre-existing conditions for respiratory failure, the overdose can kill them, as I show in this next causal pie diagram. 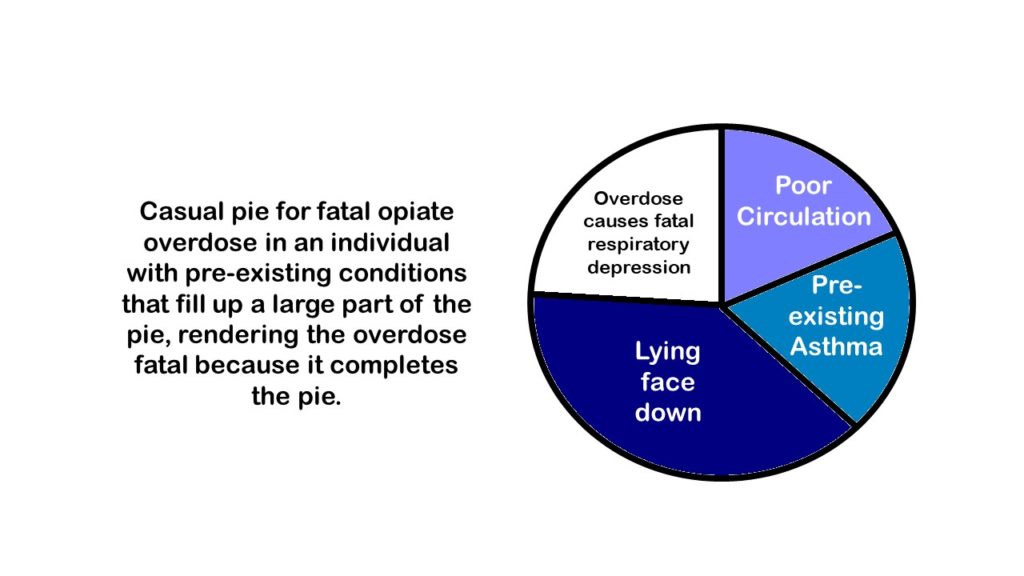 Whether trying to prevent heart attack or opiate overdose, epidemiologists like me like Rothman’s model, even though it is not perfect. This is because it helps us communicate with people who want to prevent having a heart attack or overdose. We tell them that they can remove some pieces from the pies themselves. I’m sure Mr. Floyd’s doctor told him to quit smoking, and it’s important to teach people struggling with opiate use how to position their bodies so they can breathe the most effectively when using opiates. If you remove these pieces of the causal pie, you can have “necessary but not sufficient” cause for the outcome, thus preventing it.

Learn how to make diagrams about data

by taking my data curation course on LinkedIn Learning

The Chauvin Defense and The Causal Pie

So far, the Chauvin Defense has been a classic parade of tropes:

Disgusting, I know. But the reality is that even if these tropes could somehow be true, it still wouldn’t be able to get past the logic of the causal pie. Imagine Mr. Floyd had been a person with no co-morbidities. Here is what the causal pie looks like. 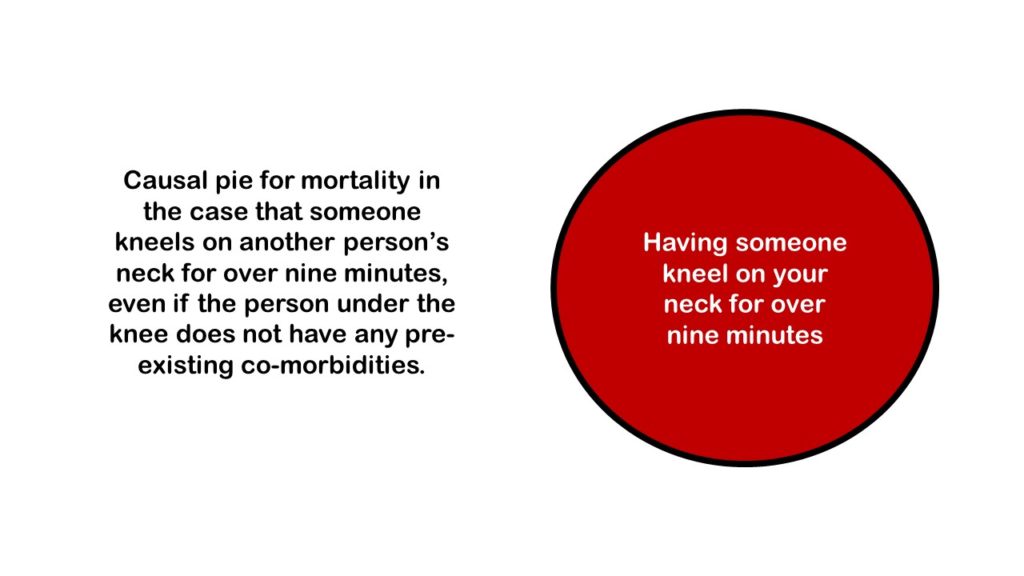 What this shows is that the “causal pie” paradigm actually breaks down when you have a substantial cause that so substantial as having someone kneeling on your neck for almost ten minutes. It’s kind of like getting run over by a train – it’s hard to imagine surviving that, but if you do, it probably has more to do with how the train hit you than whether or not you had heart disease or opiates in your system.

In fact, if you plan on getting hit by a train, it might be good to also plan to have opiates in your system.

What About Reasonable Doubt?

If someone was run over by a train, and the train conductor was arguing that the reason the person died after that was because they were not in good physical shape, it would probably not sway a jury. The fact that Mr. Floyd was narrating his own death, and that video taken by onlookers show him calling out that he can’t breathe, going limp, and then dying, makes it pretty hard for Officer Chauvin to argue Mr. Floyd was going into opiate overdose.

When people are slipping into an opiate overdose, it’s like they are going to sleep – they don’t say anything or move around. In fact, that’s why they can so easily die in that state – they don’t realize their breathing is stopping. Given this, just the fact that Mr. Floyd said, “I can’t breathe” over and over before just before his life left him is evidence that he did not die of an opiate overdose.

This is why I believe that using Rothman’s causal pie, we can make a very strong argument that Officer Chauvin’s knee on Mr. Floyd’s neck for over nine minutes was a substantial cause of his death beyond a reasonable doubt. I think it will be hard to sway the jury any other way. 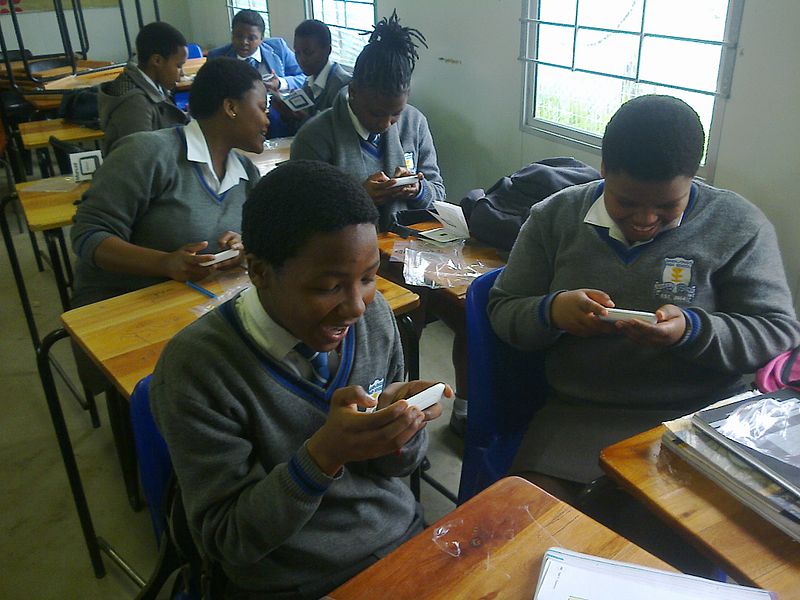 Photograph of windowsill by Nieuw and Andrzej 22, available here.

In the murder trial of Officer Derek Chauvin, the prosecution must demonstrate that the police officer’s knee on George Floyd’s neck constituted a “substantial” cause of Mr. Floyd’s death “beyond a reasonable doubt”. This presents a challenge in weighing relative causes of death, and this leads us essentially to causal inference. My blog post demonstrates how an epidemiologist might apply Rothman’s Causal Pie model to argue the case.